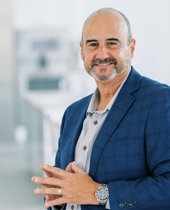 Robert is licensed in both Nevada and Florida. As a real estate Broker/Salesperson, Robert has been involved first hand in the growth of the Real Estate industry in the Greater Las Vegas area for over 20 years. Robert understands that quality, location and personal service is important to you! Whether you're buying, selling resale homes, new homes or leasing a property in the greater Las Vegas area, Robert's expert guidance and experience will provide you with all the details for you to make a decision on market areas, location, home quality and financing.

The Rob Morganti Group are Las Vegas Realtors with over 20 years Local Experience in the Las Vegas & Henderson Real Estate Communities.  Let our experience work for you! Our website offers MLS home search access including all of the homes, condos, and land available within the MLS system in the Las Vegas, Henderson, North Las Vegas & Boulder City areas. With our site having a direct MLS Feed it’s the only site you’ll ever need. Our site is easy to navigate, fast and has advanced search tool features.

We are repeat customers of Robert Morganti. His expertise and responsiveness was key to selling our house in two weeks. His negotiation skills allowed us to sell our house at a value we felt was fair as well as the buyers. I recommend Robert to anyone interested in selling a home. Robert also helped us in purchasing a new home. His skills really shined when we were having issues with the builders designed center. We were so disappointed with what was happening with the design center that we were not going to move into the house and sell it immediately. He negotiated with the builder to correct there mistakes and today we really love our new house. We cannot say enough how pleased we are.…

Robert has been incredible to work with over the past few months. So much so, I purchased two homes with him. His knowledge of Las Vegas neighborhoods, construction and zoning was invaluable.
Looking forward to working with him again

Excellent agent. No brainer to use Robert vs some other random agent, especially if you are experienced with real estate and don't want to deal with someone who you feel is patronizing you with broker babble and other obvious salesman clichés.

Exceeds all of my lofty expectations at every level of the business relationship. Top notch best in class in his field. Robert provides unsurpassed service and communication that has continued to exceed what I was expecting from a real estate professional. Whether it be text, phone, email or smoke signals, Robert's efforts to delight his clients has no boundaries. He has earned my business and respect now and into the future.

This was our 4th time using a real estate agent, Robert was "hands down" the best. This was also the the biggest ordeal we went through buying a home, with everything that has changed. Robert guided us through it all. We would recommend him to everyone we know, in fact we already have recommend Robert, and another sale took place.

Robert is a very knowledgeable real estate professional that assisted us with the puchas of a home in Henderson that I would highly recommend to others.